Our water villa is only 10 minutes away from Schiphol Airport and about 25 minutes from Amsterdam City center. The water villa is situated in a unique location with free parking in front. 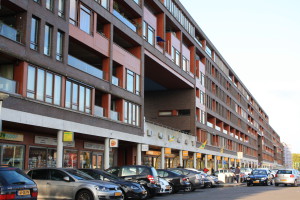 The nearest supermarket is about 10 minutes walk or 5 minutes on the bike. Out the gate to your left, go on the Zuiderakerweg about 500 meters, than you take a left on the Valutaboulevard until you get to a road you cross the road, the shops are under the flat, see picture on the left.

The directions to the tram is equal to the direction for the shops. Tramline 1 has a frequency of 10 times an hour during rushhour and outside the rushhour 8 times, so you never have a long wait. Tramline 1  – Centraal Station – Leidseplein – Surinameplein – Station Lelylaan – Osdorp De Aker and vice versa. The first tram starts at 5.52 in the morning the last tram is leaving from the central Station at 0.25.

The earliest mention of Sloten is dating from 1063, some two centuries before that of Amsterdam, when there was a chapel at Sloton near the southwestern tip of the Slootermeer (now Sloterplas). Since 1175 is the village with the church on a terp on the current Sloterweg but at the Slootermeer remained the ‘Old Cemetery’  for centuries. In the Middle Ages Sloten had a large brick church destroyed by Geuzen in 1573 during the Siege of Haarlem. In the 17th century restored (now protestant) Sloterkerk was due to dilapidation replaced by the current churh (built in 1861). In 1901 they build  the Catholic St. Pancratiuskerk . This church is the first work done by architect Jan Stuyt.

In front of our houseboat is the Middelveld Akerpolder. You can see that the houses are lower than the water of the canal. It was a peatland area between Osdorperweg and the Haarlemmermeer. The drainage was done with the Akermolen built in 1876. The mill with its wings, which had a flight of 28 meters, was one of the largest Dutch polder mills. The wind was too an uncertain factor in the drainage. The upperstructure of the mill was removed and the hull was designed to be a house for the polder master. The waterworks in the mill not only kept the Akerpolder dry, but also could turn the polder full of water in times of war.

The Aker Mill is the only remaining hydraulic engineering work between in the former southern flank of the Line of Amsterdam. In late 1999, the mill was threatened to be demolished. He had no function, and there were other plans for the dike. Some residents managed to prevent degradation. After a long period of wrangling in which the building was declining continuously, the mill is restored and there is a teahouse.

For a nice rest after cycling or hiking in the area or just read the newspaper at the big table for regulars? In the teahouse Akermolen enjoy delicious coffee and cake and various lunch dishes. In fine weather, enjoy the terrace on the water.

The Sloten windmill is a tower mill, with an octagon from 1847. It is the only mill in Amsterdam that is accessible to the public. The mill lies on the outskirts of Amsterdam, at the Ringvaart and sees to it that the water level in the lower lying surroundings remains below a specific level.

The Sloten windmill is a draining mill, which is still functioning, can be visited daily from 10:00 am. (except 1st January, 30th April (King’s Day) and 25/26th December). The Sloten Mill has an elevator, so that also elderly people and physically handicapped will be able to visit the gallery (balcony). With pleasure a number of voluntary co-workers explain everything during the guided tour through the mill. And if it is at all possible, the miller shows how he turns the mill cap so that the vanes face the wind, how he let the vanes rotate or on the contrary stops them, or how he puts the sails in the vanes.

The Coopery Museum
This museum is unique in the Netherlands as it is only place where coopery crafts can still be seen. Wooden casks were used for packing, storage of products such as salted fish, meat, cheese, beer and onions. Wine and cognac nowadays the best known examples for casks are still used. Our museum has brought to life the old handicraft. You will find an authentic workshop with all special needed tools.Combination ticket mill, museum and tour village Sloten € 8,50 p.p.